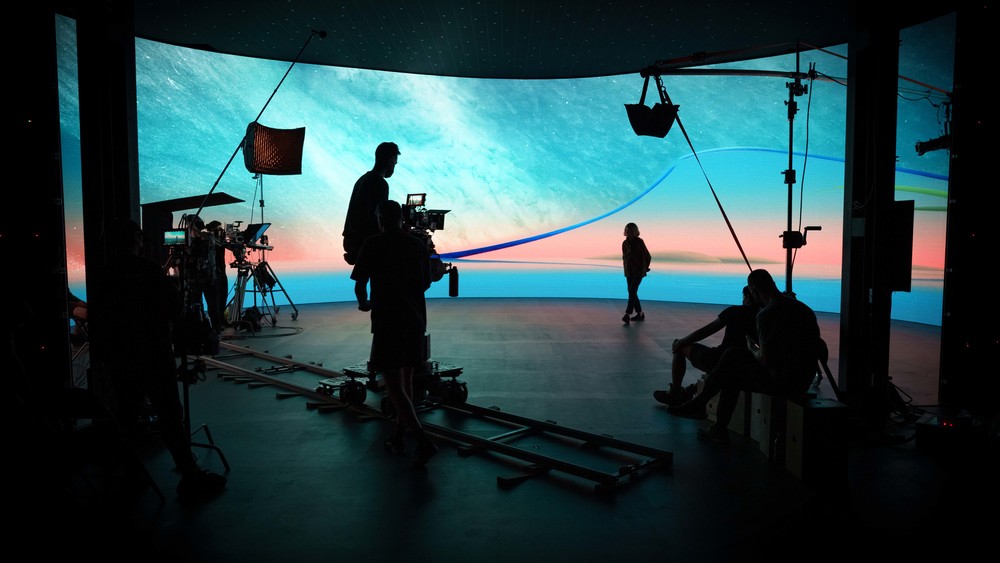 Studio Alpha AKA 'The Mirage'

2D House is excited to introduce The Mirage, a 50ft wide by 17ft tall curved LED Volume located in Studio Alpha. This immersive virtual production studio pushes the limits of what filmmakers can accomplish from just one location. Using digital environments generated through Unreal Engine, the Volume replaces greenscreen compositing with virtual sets that can be manipulated and edited in real-time. With the help of advanced camera tracking hardware, the digital environment moves in response to positional data, creating the effect that the talent on screen truly exists within the landscape surrounding them. By blending the physical and virtual worlds, filmmakers can harness the powerful LED wall to light their actors and even create or enhance accurate reflections.

Unlike traditional green screen filmmaking, an LED Volume provides real-time representation of the background that will appear on screen to the audience. This real world engagement allows for better performances from the actors working within it and provides the director, cinematographer and production designer a unique opportunity to be more directly involved in the final visual effects process. Visual effects are conventionally generated during post production well after the principal photography has ended; an LED Volume flips the workflow so that VFX are integrated into the development and pre-production stage well before the crew ever walks on set. With the ingenuity of Unreal Engine, the environments created and explored during pre-visualization can be edited right on set allowing a director to try different backgrounds and even move specific assets that appear on screen.

Utilizing camera tracking technology rigged within the studio, filmmakers can point the camera at any place on the Volume and watch the environment relocate in real time to match their field of view. This produces a hyper realistic effect of being on location as landmarks displayed on screen will move to match the position of the lens.

The limits to what filmmakers can produce within the Volume are still being explored, when one considers the possibilities of shooting multiple locations from around the world in one day, in one room, the potential is truly astounding. This, coupled with the use of Motion control technology, such as the Mark Roberts Bolt Arm or Milo Crane, not only allows for unique creative productions but also precise, repeatable moves that can be accomplished without the worry of environmental changes like weather or time of day.

Considering bringing your next project to 2D House? Email studios@2dhouse.com to learn more about our spaces as well as our Camera, Lighting and Grip equipment bundles!